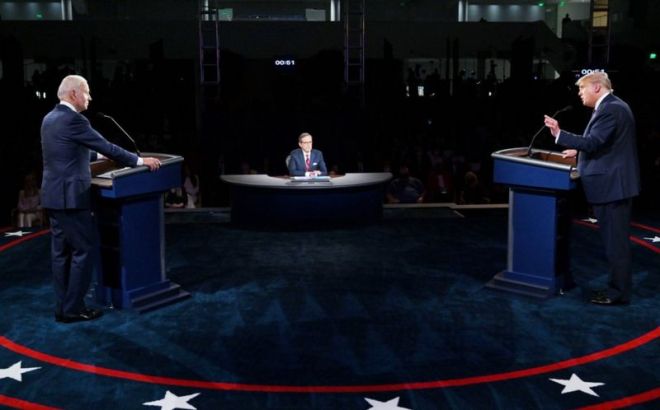 I have written a lot of things in my life. I’ve written countless pieces about sports, crappy poetry and collections of random observations about the world around me. I think I know how to write fairly well. I don’t know how to perfectly write what I am about to write. There’s no great way to write something that, to make it overtly simplistic, half of the population will hate and half of the population will love once I say it. Here goes nothing.

I am voting for Joe Biden on Tuesday.

In fact, I don’t find it to be a very hard decision at all. Sadly, I think elections on the presidential scale should be hard. We should be personally debating who we want to vote for until very close to the time will fill out our ballot. That hasn’t been the case for me. I’ve known for months that I’ll be voting for Biden.

It is not because I love Biden that much, it is because I am so strongly against virtually everything that the current President and his fellow party have done over the past four years. I wish I could list everything that I don’t agree with but when the President spews lies more often that truths, you lose track of all the things that piss you off.

To put it as frankly as I think I can, I care about people and the concept that every person should have the right to live their life the way they want to. The fact that we can’t all agree on that is incredibly disheartening.

The current administration has separated families at the border. Children are in cages separated from their parents. There’s a very good chance that these families will never be fully reunited. That is happening right now on American soil.

We are close to walking back any of the progress that our country has made on rights for people in the LGBTQ+ community. How can we claim to be the land of the free if not everyone is free. It is pathetic that this community has to fight for rights just because some people are scared of their sexual preference. Rights for this community does not diminish yours or your children’s.

America has given the Black community the short end of the stick since the inception of our country. The Black community has to jump through hoops of fire blindfolded that I will never be able to fully understand, but I am trying. This administration isn’t trying to understand one bit.

Then there’s reproductive rights and the rights of women. If things don’t change, it is inevitable that those rights will be drastically reduced. If you think women are lesser than men, I can’t help you, but you do truly need help.

Donald Trump doesn’t care about women. We right now have a President that has had 25 women accuse him of sexual assault, rape and sexual harassment. One is too many. There are 25 women who have come out against him. That’s the kind of man we want running our country just because his tax plan might be a little bit more beneficial? Because he is “not a politician”? Because he tells it like it is? That’s bullshit.

The most bullshit thing I’ve seen is the Trump 2020 flags that say “No More Bullshit”. He has had four years to clean up the bullshit… but it I guess it is hard to clean it up when you are the one constantly shitting.

Trump doesn’t care about people. He only cares about himself. He’s proven that time and time again.

Again, I care about people and the concept that every person should have the right to live their life the way they want to. I want to live a life where everyone is free.

On Tuesday, I am going to go into that voting booth and I am going to vote for Joe Biden to be the next President of the United States. Someone who isn’t going to constantly lie and gaslight us. Someone who I don’t have to worry about starting a crisis by sending a tweet. Someone who actually cares about every single American. I’m voting for Joe and I hope you do too.

I didn’t write this with the purpose of changing minds, but to speak my peace on what I see. I fully expect that I just screamed out over 800 words into the void, but I had to say it. I’m not going to let the truth die.

Now I have written political commentary.