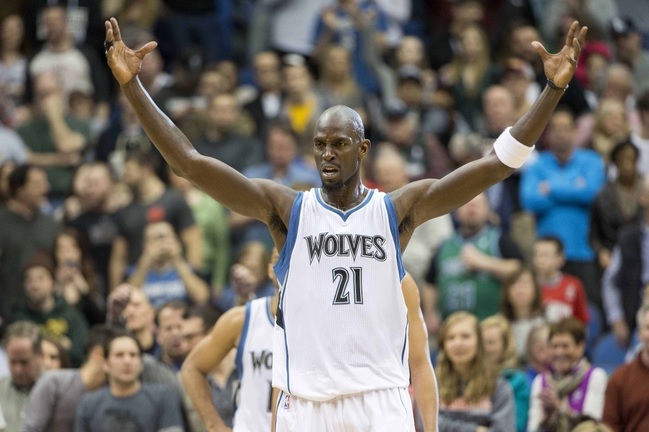 Maybe I was naïve, but I thought the move bringing Kevin Garnett back to the Minnesota Timberwolves was, at a minimum, a decent move. A veteran defensive presence never really hurt anything, plus if it gets the young studs playing all the better.

The funny thing is that he Garnett been much of a presence… literally. The Timberwolves have played a total of nine games since he started playing with the Wolves and he has only played in a total of five games. Five.

The four games Garnett has missed have just by chance happened to be road contests, a contest in which the Timberwolves get no percentage of the gate. It’s real fishy.

I understand that Garnett isn’t a young man anymore and won’t play in every game, but he does actually need to play for this move to look legitimate. The Wolves have just played three straight road games, none in a back-to-back, and Garnett hasn’t played in any games.

He needs to get on the floor.

Garnett and the team can say he’ll do more teaching in practice, but that is also a double-edged sword. Garnett frankly doesn’t deserve practice minutes if he isn’t going to play in half of the games on the team’s schedule.

When this move came about, I was all for it. I realized that Garnett was not going to turn around the Wolves, but I was excited to see what he could do with the bushels of young talent on the roster. I can’t see that if he never plays.

The not playing epidemic is even worse when taking in the fact that the team still wants to give Garnett a contract extension. An NBA roster can only hold 15 players, each spot is valuable and each spot should be able to play for yoi every single game, apparently Garnett can no longer do that.

Garnett gave his heart and soul to basketball and this team years ago, but there’s not a whole lot of heart in anything going on with his playing after being acquired at the trade deadline.

It’s looking like the Timberwolves traded away Thad Young for a week’s worth of attention and two sellouts of Target Center. That’s not the only thing that sold out in this situation.

Beyond the awesome team success, it was an ultra-special season for the Kottke family by having Sara, Rachel and Kristi all playing on the same team with Kaitlyn being an assistant coach. I love these four beyond words and I am so proud of the hard work they put in to the game of basketball. I’m so excited to see where basketball takes all of them in the years to come and I can’t wait to be right there cheering. KK, Dynamite, Rach and T, I love you all so much! 🐴🏀💙 📸: @k8maiers & I
This year’s run might be done, but this is just the beginning of the stampede. This is just the beginning of something special and it’s going to be something to watch. This season might be over, but I’ve learned it’s always basketball season. Thank you, Mustangs, for giving us a great season and being great people to cheer for. I’ll forever be proud of this group. 🐴🏀💙 📸: @k8maiers
Two down. 🐴🏀💙 📸: @k8maiers
One down. 🐴🏀💙 📸: @k8maiers
Regular season over... baby, let the games begin. 🐴🏀💙
My other Valentine: the game of basketball. 🐴🏀💙
A black and white photo makes it feel timeless and that’s what your love is. The picture may be in black and white but you fill my life with so many beautiful colors. I’m the luckiest guy. I love you so much, @k8maiers! ❤️
Ask us about adopting a greyhound today! 🐴🏀💙 📸: @k8maiers
I’ve been to a lot of basketball games. This was the only one, so far, where a pan of freshly made caramel rolls was auctioned off for $500 at halftime. 🐴🏀💙 📸: @k8maiers